Homeopathy for Animals: Markos, the country boy with Leismaniasis (Kala-azar) 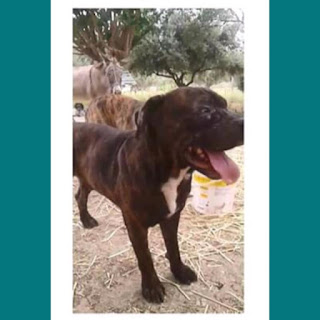 He was diagnosed with kala-azar 25 days ago.
Chemical veterinary therapy has been recommended.
He gets tired more easily. He has instability in his back legs.
It's hard to get on his couch.
I have 7 dogs and he is the leader of the pack.

He wants to sit at home and in front of his stove.
If someone else comes, he acts like crazy.
He licks his feet a lot, especially the back feet.
He returns to the carpet moaning and scratching his skin.
He has started to lose his hair around his eyes.
More on the head and behind the legs.
It's like dandruff, drier and whiter.
In some places it opens and drains
He sleeps well.
Now he doesn’t want to come out as often as he used to.
He always woke me up to take him out.
Now he can ask for it at 11 o'clock in the morning.
We had his mom.
When he was born a truck stepped on his brothers.
They stole him from us and we saw him on the road after 5 months.
They had sold him.
He grows up with my two children and is a member of the family.
He stays at home.
He is jealous, cuddly but outside the home he is different.
He has eaten deer & goats.
Every animal that runs he chase it and kill it.
He is the leader of the herd and our guardian.
He was given ,from another homeopath,
a homeopathic treatment for 20 days.It didn’t work.
I observe that his eruptions goes to the inner side and his head is full of pimples.
The sucker mustache has lost the hair and legs have sores.
It's like dandruff, drier and whiter.
In some places it opens and drains.
This has been happening for a month now.
It started when we get my son to the hospital and we were away from home.
He was probably upset.
They are very close to each other.
He comes to me for hugs, now he comes for caresses in less frequency.
He doesn't have much appetite.
I throw a play-ball to him and he doesn't chase it, he gets tired.
2nd Meeting
Marcos is fine. The wounds were closed from the first days.
They dried up and turned white. His skin makes a lot of dandruff.
He has not so many bulges on his head.
His eyes are not so good, he has green discharges. His eyes are almost closed.
He has lost hair. The muzzle is white.
He comes for caresses a lot, drinks a lot of water, eats more.
I don't think that he feels cold. He's not looking for the stove so much.
He comes to sleep with me while he used to sleep in front of the stove.
He sleeps a lot and he is quiet.
He is more cheerful and plays more.
He is insecure when we leave home, he wants to come with us.
Where he sits, there are white pieces.
He has itching, not as much as he had.
He licks his feet not with the same frequency.
I see on the carpet or on the floor pieces of skin with hair on.
Too much dandruff. His skin is too dry.
Although he drinks water.
His tail has a hairless line.
His tail was caught in the door, where he had once been wounded,
the hairless line started.
When he licks his skin a lot, he may do a little wound.
He doesn't even want to know what is the shower.
He disappears. He left once the bathtub with the soap in his skin.
He doesn't want it. He always was like that, not just now.
He swims in the sea normally. He likes it very much.
A monthly schema was given . After few days something came up.

May 4, 2020
Good morning. He had a seizure last night.
He had a terrible itch and ran from corner to corner inside the house.
He was very anxious. From scratching and licking, he opened wounds in his elbows,
behind his ear and in his eye.
I put balsam oil on his wounds .
I gave the remedy that has suggested for acute symptoms
so he calmed down and fell asleep.
In general, he has a lot of itching everywhere.
Wherever he sits, the place is filled with white scales.
The line in his tail continues and fell out pieces of skin and hair together.
He has not a good mood. He is upset.
He drinks water. He doesn’t eat so much food. He usually stays at home and sleeps.
I have a small pig and a few days ago he bite it inthe neck,
wanted to kill it and made a huge wound.
I save it because my reaction was very quick . We scold him a lot that day.
I let him to come home late in the afternoon and he was very upset.
Could he have been so affected by this? 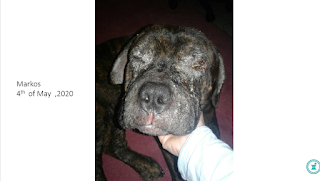 May 5, 2020
Good morning. Marcos is more calm.
He was in panic again at night but only for 2 minutes.
Then he calmed down. He is constantly licking his skin and has wounds on his elbows.
His breath smells bad. He prefers to sit alone.
When he heard the dogs barking, he had to get out, but now he doesn't get up.
He has a lot of thick green discharges. When he drinks water he drinks with desire.
He ate last night. He has not searched for the stove but always sits on a carpet.
He opened the wounds because he was constantly licking them.
When we have a new animal, he goes crazy.
Especially if the animal is running he kills it. He has killed 3 deer.
He doesn’t care about the chickens.
The cat that he grew up with doesn’t mind him but if another cat comes he will kill.
A few times has a bad smell on his skin. His mouth has still an offensive odor.
His head, which has the biggest problem, smells a little bit.
May 6, 2020
We went for a walk with Marco yesterday.
Usually when we ride the car, saliva dripped from his mouth.
Yesterday, he hadn’t any saliva at all.
When we left the car to walk he was anxious he touched us and
he wanted to be close to the car until he went in and sat in the car.
I hugged him and we were walking.
My husband was followed us with the car and Marcos was constantly looking back for him.
When my husband come in front of us with the car ,
Marcos left my side and he was running behind the car.
Even he wanted to come with us when we left the house yesterday,
he didn't seem to enjoy it. He was very insecure.
When we come back home he ate and laid down in front of the stove.
A few hours later he left the stove and he is still sleeping.
He didn't wake up at night and he doesn’t itch his skin.
Since 8pm yesterday, he hasn't gone out yet. He ate yesterday when we came back.
Now when I give him water I notice that he doesn't drink so much in general.
But when he drinks, he drinks with desire and enough.
Since yesterday he hasn’t any drink water .
In general he is in the same condition as yesterday.
May 7, 2020
Good morning.
Marcos had a quiet night.
Yesterday he was at home and he went out with me for a while at noon.
The sun and the heat seem to bother him.
He entered the house and he went out again in the afternoon with me.
He was active again, he took a short walk inside and outside the plot.
When the neighbor's dogs came down, while other times he would go for a fight,
yesterday he only barked at them and he returned home.
Then he entered the house even though I was still outside. He seems tired.
He ate, but did not drink water. He once drank from me.
Yesterday all day and today his nose is completely dry.
Sometimes he tries to rub his head on a wood or on sofa’s pillows .
Last night he slept in front of the stove, in the morning he came in my place
and he continued his sleep on the carpet.
He has extreme soft hair and skin.
He has no itching.
Where and when he licks his wounds in his elbows.
May 8, 2020
Good morning. Marcos is better.
He is more active than yesterday afternoon.
He has been out more than once. He slept calmly.
May 9, 2020
Good morning. Marcos slept peacefully in the front of his stove.
When I talk to him he shakes his tail again !!!!
He had stopped doing it.
He has a better mood. He still rubs his head every now and then.
His right side seems to be coming back more than his left.
May 11, 2020
Good morning. Marcos is much better.
He sleeps quietly, eats, does not drink much water.
He sits outside much longer.
He doesn’t want to constantly touch us and be with us.

(he continued his monthly schema)

13/5/2020
-Good morning. Markos may have otitis.
His ear has an offensive odor and he tinkles his head constantly.
Should I give him a remedy?
- Does he seem to feel pain?
-Yes, it seems to bother him. He bends his head to the left. Because
pain bothers him he itches his ear and he has a wound externally.
14/5/2020
- Markos is fine !
(he continued his monthly schema)

18/5/2020
Good morning. Marcos is much better.
His skin really has a huge difference especially on the right side of his
face. The left side his skin recover slower.
He is very energetic during hours with a cooler temperature because
he is feeling hot .He doesn’t move at all, but last night he did not come
into the house. He slept in the warehouse with the other dogs .I think
that was good sign for the level of his insecurity. He doesn’t eat so
much, but also the other dog eat a little. He drinks water.
His skin still smells to me when he sits next to me.
He still has dandruff. 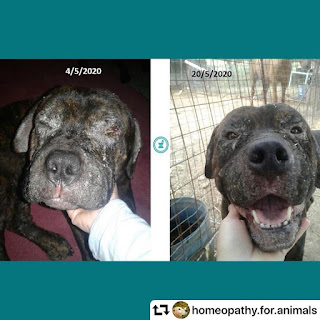 Markos is a very clear case.
He lives in a big farm with many animals.
He didn’t take any conventional remedy for Kalazar.
His body reacts beautifully in the treatment.
With the two acute phases is very obvious that

acute phases are connected to the chronic diseases.

What is very important for Markos is how everything started.
“It started when we get my son to the hospital and we were away from home.”
A dog who always was with the boy suddenly the boy left the home for the hospital. 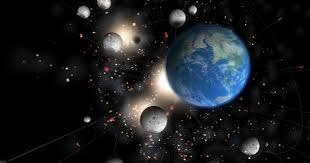 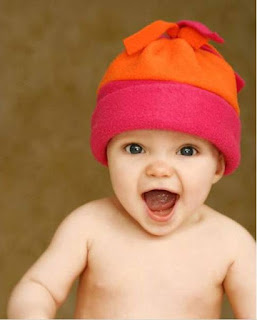 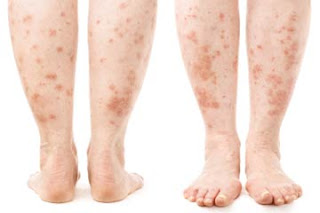 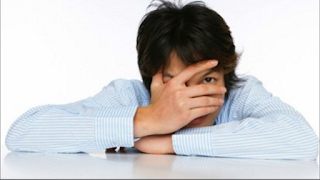 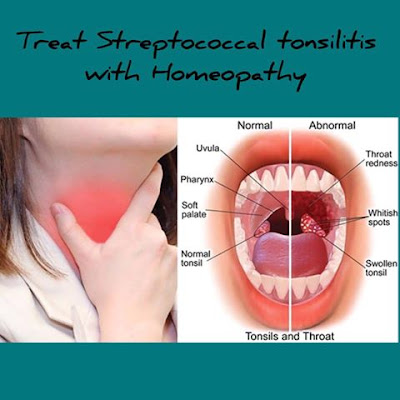 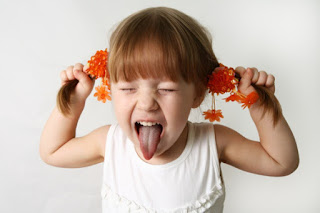 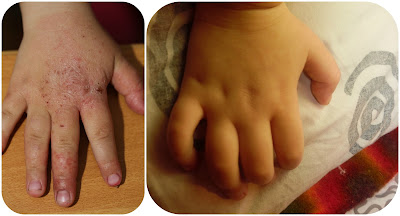 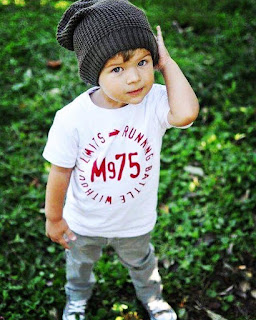 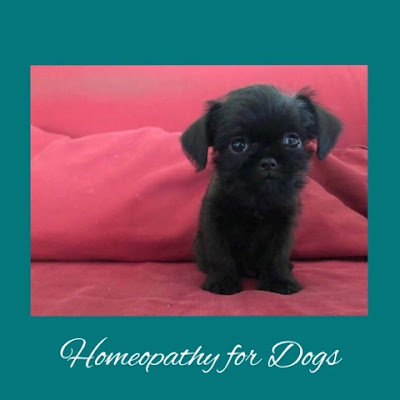